Jessica McKay (June 23, 1989) better known by her ring name Billie Kay, is an Australian professional wrestler who currently signed to WWE performed under SmackDown brand. She is part of the tag team with Peyton Royce as The Iiconics.

Kay received a tryout with World Wrestling Entertainment (WWE) during their tour of Australia in August 2014. On 13 April, 2015, WWE announced Kay as part of a new class of NXT trainees. She made her debut on the 10 June, 2015, episode of NXT, where she competed in a losing effort against Becky Lynch. After competing in most of her matches at NXT as a face, Kay worked her first match as a villainess on the October 21 episode of NXT, losing to Asuka. On the 13 January 2016 episode of NXT, Kay competed in a number one contender's battle royal for Bayley's NXT Women's Championship, which was won by Carmella. After a long hiatus from live in-ring televised action, Kay returned on the June 30 episode of SmackDown, where she worked as a jobber losing to Dana Brooke, in which would be Billie's first appearance for the WWE's main roster. Kay finally made her return to NXT television on 27 July, where she achieved her first victory in the company by defeating Santana Garrett. After asking NXT's general manager William Regal a match at NXT Takeover: Brooklyn II on the 17 August episode of NXT, she was granted one against the debutant Ember Moon. At the event on 20 August, Kay was defeated by Moon. 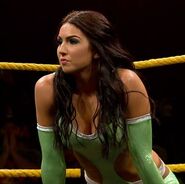